JSON Web Tokens are a great tool for implementing decentralized authentication and authorization. Once you are finished configuring your app to use the JWT package (see JWT → Getting Started), you are ready to begin using JWTs in your app.

Like other forms of token-based auth, JWTs are sent using the bearer authorization header.

In the example HTTP request above, <token> would be replaced by the serialized JWT. jwt.io hosts an online tool for parsing and serializing JWTs. We will use that tool to create a token for testing. 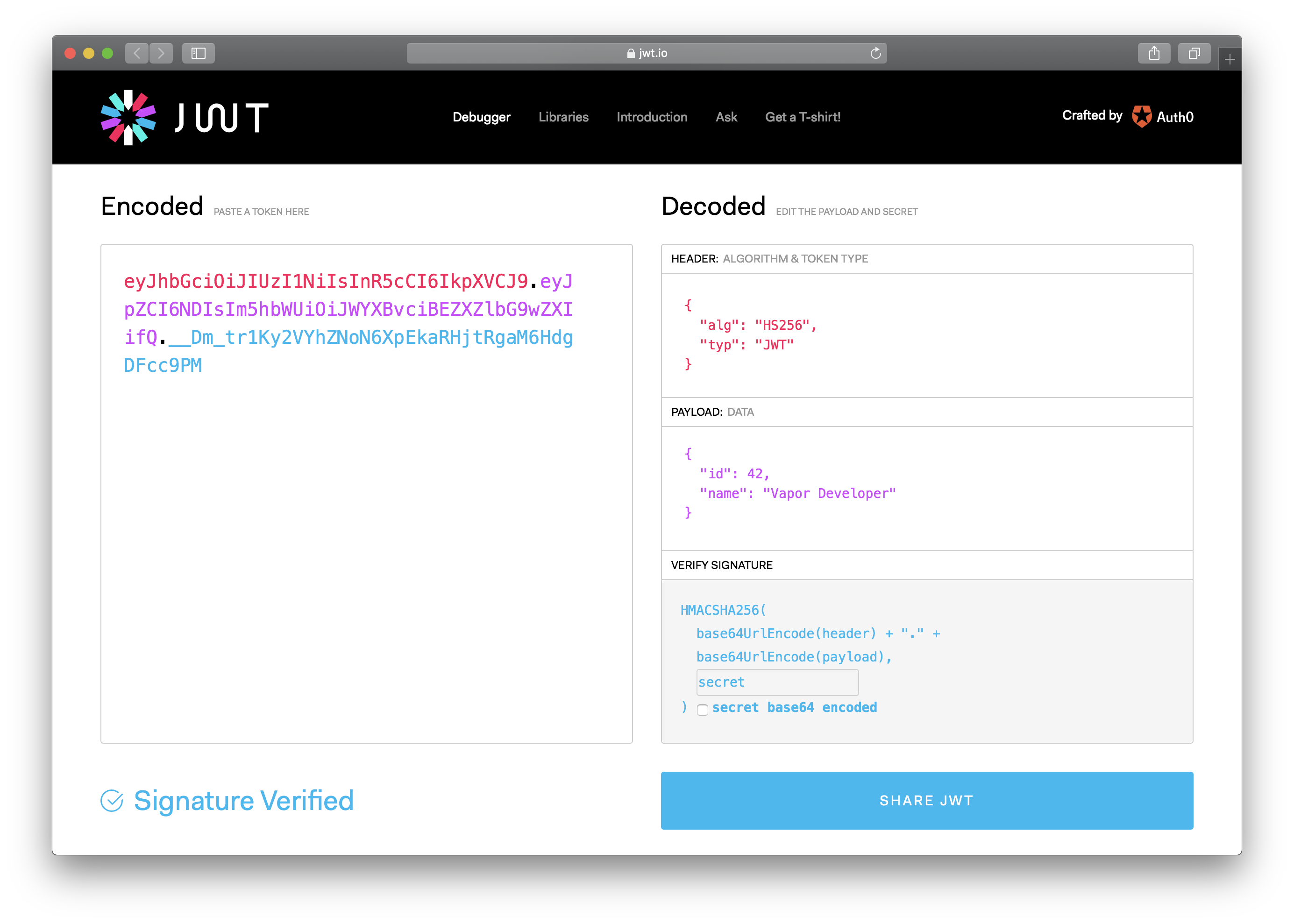 The header is mainly used to specify which algorithm was used to generate the token's signature. This is used by the accepting app to verify the token's authenticity.

Here is the raw JSON data for our header:

This specifies the HMAC SHA-256 signing algorithm and that our token is indeed a JWT.

The payload is where you store information to identify the authenticated user. You can store any data you want here, but be careful not to store too much as some web browsers limit HTTP header sizes.

The payload is also where you store claims. Claims are standardized key / value pairs that many JWT implementations can recognize and act on automatically. A commonly used claim is Expiration Time which stores the token's expiration date as a unix timestamp at key "exp". See a full list of supported claims in RFC 7519 § 4.1.

To keep things simple, we will just include our user's identifier and name in the payload:

Last but not least is the secret key used to sign and verify the JWT. For this example, we are using the HS256 algorithm (specified in the JWT header). HMAC algorithms use a single secret key for both signing and verifying.

To keep things simple, we will use the following string as our key:

Finally, here is our fully serialized token. This will be sent via the bearer authorization header.

Each segment is separated by a .. The overall structure of the token is the following:

Note that the header and payload segments are simply base64-url encoded JSON. It is important to remember that all information your store in a normal JWT is publically readable.

Let's take a look at how to parse and verify incoming JWTs.

First, we need to create a Codable type that represents our payload. This should also conform to JWTPayload.

Since our simple payload does not include any claims, we can leave the verify(using:) method empty for now.

Now that our payload type is ready, we can parse and verify an incoming JWT.

This snippet creates a new route at GET /hello. The first part of the route handler fetches the <token> value from the bearer authorization header. The second part uses the JWT struct to parse the token using an HS256 signer.

Once the JWT is parsed, we access the payload property which contains an instance of our User type. We then access the name property to say hello!

Run the following request and check the output:

You should see the following response:

Let's take a look at how to create and sign a JWT.

First, we need to create a Codable type that represents our payload. This should also conform to JWTPayload.

Since our simple payload does not include any claims, we can leave the verify(using:) method empty for now.

Now that our payload type is ready, we can generate a JWT.

If you visit this route, you should get the following output:

If you plug that JWT into jwt.io and enter the secret (secret), you should see the encoded data and a message "Signature Verified".